The Geography of India: A Shifting landscape


India has one of the most diverse, mixed and complicated populations in the world claiming almost 2000 social and religious groups, 18 registered national and regional languages and at an approximate guess, a population set to overtake China within three generations at nearly one Billion 350 Million inhabitants and growing fast!India's territories stretch all the way over to the Andaman Islands about 780 miles away in the Bay of Bengal and to the West, the Lakshadweep Islands lay nearly 200 miles of the coast of Kerala in Arabian sea.

Asia is a continent going through some amazing changes at the moment with some even bigger ones to come. India is a land of incredible diversity in every aspect but it's also one of the most crowded, over-populated and impoverished countries in the world and as its population soars and begins to overtake China's, it's going to be interesting to see what happens.

Click here to jump to the Contents or continue reading for a more general impression of the Geography of India. 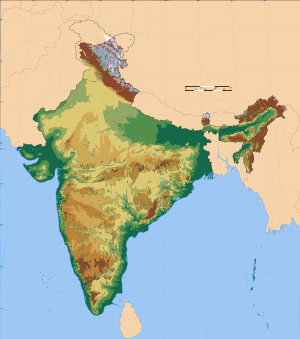 Above: Physical geographic map of India, click here for more maps of India

THE NORTH AND WEST

The geography of India in the North is a complete contrast to that of the Himalayan mountain range. The Northern plain as it is known stretches right across the top of India and slopes so gradually that from the capital city of Delhi right across to the bay of Bengal in the East it only drops a minuscule 200 metres.

The sacred Ganges river that brings life and support to so many people starts deep in the Himalayas before heading south to drain most of the northern plain before reaching the Brahmaputra River and eventually the Bay of Bengal.

The geography of India in the Northeast is defined by the beautiful foothills of the Himalayas which defend India from Nepal. India elegantly bends around Bangladesh before coming up against another of the Himalayas mountain ranges separating it from Burma.

Three states in the East separate India from Pakistan starting with the much disputed region of Kashmir in the North, down to the flat lands of the Punjab and then onto the great deserts of Rajasthan. The state of Gujarat sits South of Rajsthan and is separated from Pakistan by huge marsh lands on its North before poking out into the Arabian sea on the West.

The amazing marshland of Gujarat, known as the Rann of Kutch, dries out in the dry season leaving little salt islands dotted all over the strange plain. It leaves a very surreal scene and worth a visit if you can get there!

THE SOUTH AND CENTRE

The Geography of India is drastically different everywhere you go. As the northern flats heads south, they begin to rise up into a high plateau known as the Deccan. Surrounding the huge plateau on the West are the Western Ghats that lead on to the sea and then on the East the Eastern Ghats which run parallel to the sea. Both mountain ranges meet in the deep South and form the Nilgiri Hills.

The Godavairi and Krishna Rivers are the two big rivers in South India and both rise on the Western side of the Western Ghats before flowing East over the Deccan and then down into the sea on the East coast.

India lays claim to a number of islands around its coast and much further out, an example being the Anadman and Nicobar islands.

About 300 km west of Kerala are another geography of India specials: the famous coral atolls known as Lakshadweep. Made up of 33 coral islands covering 32 sq km the islands are believed to have formed around a submerged volcano. 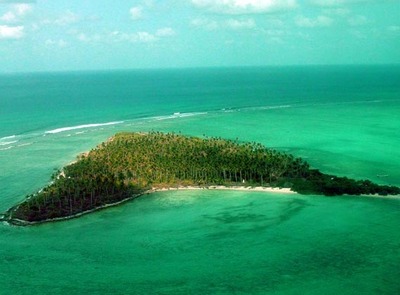 Above: The geography of India and Agathi Island: One of the 33 Coral Islands that make up Lakshadweep

More Informatinon about the geography of india

Home to the largest mountains on earth, the Himalayas have an equally large influence on the surrounding nations.

India has a hugely diverse population and makes a fascinating race to study. See also the Origins of the Indian People.

The Flag of India

The flag of any nation is a precious thing, to some people anyway. It is a symbol rather than mere material and it is something that an entire nation can put there trust in and the Indians are certainly proud of theirs.

The river Ganges drains almost 1,000,000 Square miles of land and supports the highest density of people with a staggering population of well over 420 million people who either live on, close to or in some way rely on the river for their livelihood. Also check out the route of the Ganges.

When the monsoon closes in so the river rise and the water falls. India is home to many very spectacular waterfalls especially in the monsoon season.

The Wonders of India

From the Taj Mahal to the golden temple, the manmade wonders of India are many and are beautiful.

How long is the longest river? How many tons of CO2 are produced each year? Which is the highest mountain? How hot does it get? And loads of other interesting facts about India geography.

Where are the Himalayas? How big is India, where is the capital, with whom does she border? All the questions and more answered on this page.

From the Geography of India