So with such a massive influence on the local and national population, why is it that the river is so completely and utterly disgusting?

Well this is a question that is asked everyday and to help answer it we first need to take a look at a few facts which mean that the environmental issue in India are some of the worst in the world. When you've finished you may want to have a look at air pollution in India

This page contains some graphic images

Below: Sewage pouring into the Ganges, Varanasi 2009 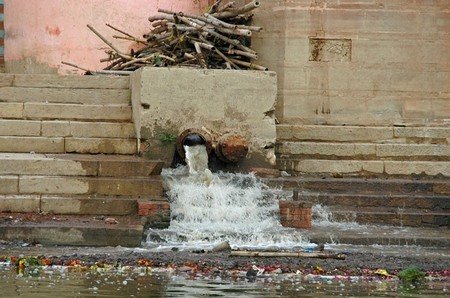 A route to heaven and a highway of flesh

Ganges Pollution and the nectar of God

One of the biggest reasons why the river has quite literally been shat upon in the past 20 years is because good old fashioned human denial and ignorance.

The problems have been allowed to escalate to the dangerously high proportions we have today because of that fact that Hindus simply do not want to accept that their 'mother Ganga', nectar of God, bringer of hope and purifier of souls is or can be responsible for bringing them illness and misery. Instead claims of record pollution fall on deaf ears.

Follow this link for more information about environmental issues in India.

Below: A human body passes while a man washes in the river, Varanasi 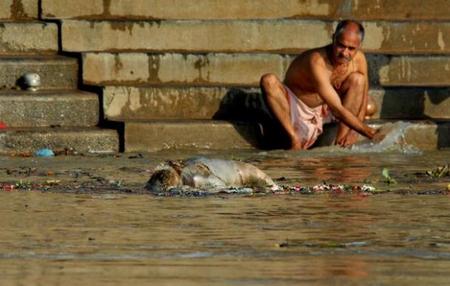 Some of the main Ganges river pollution contributors are those in industry - specifically in this case those of the leather industry who use vast amounts of chromium and other toxins and chemicals - the majority of which ends up in the slow paced waters of the Ganges during the dry season, peak time for the tanning industry and also when the river is moving at its slowest.

Thanks to globalisation, international, national and local government this trend seems unlikely to get better with more and more factories cropping up every week and all running under a distinct lack of regulations.

Below: Chromium pollutes the Ganges turning it toxic and poisonous 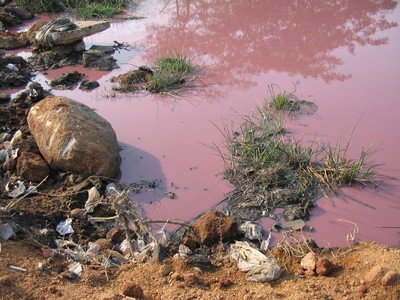 Now these problems are huge on their own but couple with this with fact that India's holiest river, specifically at the banks of the ton of Varanasi, is considered as the pilgrimage site with tens of thousands of pilgrims entering the city every month to bathe, wash, sip and drink the water.

The river is now a leading cause of infant and child mortality rates, skin problems and some more, serious disabilities -

The Yamuna river, the main contributor to the Ganges has been completely devoid of all water and sea life for the past 15 year!

Another of the main issues of the Ganges river pollution is the vast irrigation networks which have cropped up to feed India's ever expanding population - These vast networks of canals and ditches slowly but surely filter off the water from the Ganges and it's subsidiaries causing an alarming drop in the water levels, especially in the dry season. Another sad side story of the destruction of the Ganges is the downfall of the native Ganges river dolphins.

Ganges river pollution is getting seriously bad( as you may have now noticed) and something needs to be done now.

A solution however, seems far away with gross negligence, ignorance and stupidity pouring from every sect of Indian society from Government, the people and of course big business which still continues to rape India and her people at every level.

But, all hope is not lost and there does seem to be some hope on the horizon for the serious case of the Ganges river pollution. The world bank has agreed to loan India al most $1 Billion to clean up the Ganges - Not an insignificant amount by anyone's standards.

What is more, some of the claims made by Hindus about the rivers purifying effects do have some basis in science. The river is thought to be especially full of 'bacteriophages'... little things that destroy bacteria specifically those known for causing cholera and dysentery epidemics.

The river also has a unique ability to hold and retain oxygen in record amounts. Although nobody knows why, this doe mean that things can still grow.

Having said all this though, once you have seen the river running through Varanasi you will no doubt feel as I do about this. The thick black sludge transporting almost everything but water.

We can send a shuttle into space, we can build the Delhi Metro. We can detonate nuclear weapons. So why can't we clean up our rivers?

Where is the Ganges river

Rebbecca from Rancho Cucamunga asks this rather pertinent question and is given a rather fabulous answer by Tony from California. check it out!

This amazing creature still somehow survives in the murky waters of the Ganges river although still greatly under threat from extinction.

Complete information about this amazing river, the people who depend on it and it's future

The the pollution crippled rivers, the unbreathable air and a literally breathtaking litter problem - India has some serious environmental problems...

This video is made up of a beautiful song and a striking selection of photos and facts highlighting the terrible state of the rivers in India and the looming environmental and humanitarian crisis.

This video gives some more information about the causes and consequences of extreme pollution in Ganges.

Return to the Geography of India