The pollution given of from combustion engines, burning wood and coal are considered to be some of the most dangerous forms of air pollution in India.

The facts behind the pollution

One of the things which struck me as most shocking when I was researching this article was that 75% of households in India use wood as the number one fuel - in turn resulting in a death rate of about half a million people a year and serious illnesses for millions more including lung cancer, lung infections and chronic obstructive pulmonary disease.

As previously mentioned, the main contributor of air pollution is the transport system,. This stems primarily from the use of older diesel engines which kick out on average 170 times more sulphur than modern engines. As a consequence of this, the asthma rate for children in some of the larger cities is now at %50 and rising fast.

A surprising cause of the pollution is surprisingly cremations. Over two thirds of the Indian population burn their dead and most of the time on open fires.

EFFECTS OF AIR POLLUTION ON THE ENVIRONMENT

The effects that result from the air pollution in India are some of the most widely studied and documented of any country.

Above: The effects of air pollution in Bangalore causing early morning smog

Acid rain is simply rains which falls from polluted clouds - OK, it's a little more complicated than that but in essence that is what it is. In India the acid rains is primarily caused by Industries and power stations which give of vast amounts of either Sulphur, Nitrogen oxide and various other oxides.

These pollutants rise in to the atmosphere, form into clouds and drop as rain often hundreds of miles away from where the originated. Follow this link for more of the causes and effects of acid rain.

Damage to the ozone layer: A rapid rise in the use of aerosols in India over the last decade has, according to scientists, been dramatically changing the Indian climate as well as having a not unnoticeable effect on the rest of the world. A substance known as CTC which is a strong ozone depleting substance is still widely used in India as a solvent and is actually banned in most other countries.

SO WHAT NOW for India Air Pollution?

God forbid that India should ever take to industrialism after the manner of the west... keeping the world in chains. If [our nation] took to similar economic exploitation, it would strip the world bare like locusts.
Mahatma Gandhi

What do we do about India Air pollution? What are the steps forward? Well this is something that needs to be discussed on a national level. The astronomical economic growth India is experiencing and has been experiencing for the last few years has perfectly mirrored the dramatic decrease in the quality of the air.

India really has one option to curb the air pollution. Pollution control is a term used in environmental management. It may seem obvious but it is not something that often comes up in debates about India air pollution. It simply means limiting the amount of pollutants which can arise from different sectors of industry, transport, mining, households etc.

Below: Climate Protest in India, Ladakh, 2008 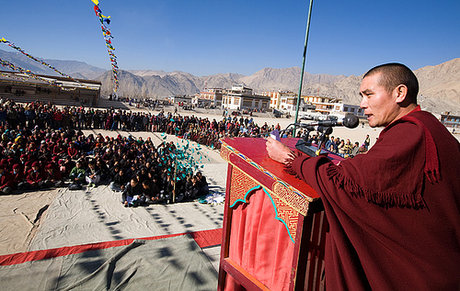 The first step in this is education - If you think education is expensive, try ignorance, is a quote which summarises not only India's view to pollution but the rest of the world too. Without education very little will ever change except for the worse.

OK, maybe I don't have the answer, actually I really don't know what the answer is but I feel education is a good start. If you've any other ideas please feel free to use the comment form at the bottom of this page.

Whether it's the rapidly dropping water tables, mass deforestation, land degradation or river contamination, India has a millions environmental issues and most of which on a massive scale.

Perhaps one of the most polluted rivers in the world, the Ganges river has become a cesspit of filth, bodies, industrial waste despite still serving as the number one destinations for millions of pilgrims each year.

or the Environmental issues in India