Poverty in India is still a major issue even in this day and age. The population of people living below the poverty line in India is the highest in the world and the problem is not going away. If you've ever been to India then you'll understand - from the moment the place hits the ground the poverty is evident, indeed it is the idea of such extreme poverty which puts people of the idea of travelling to India in the first place.


The Problems of poverty in India

Since India’s independence, the subject of poverty in India has remained a major concern. According to the common definition of poverty, when a person can no longer meet the required levels to maintain specified standard of living, they are considered poor.

This becomes apparent after just a short amount of time spent in the country. For example, states such as Goa, Delhi and Punjab have relatively low poverty ratios whereas %38 of the population of Bihar and Orissa live below the poverty line, the figures are even worse for Calcutta and Maharashtra pushing nearly %50.

The poverty and situations that people are forced to live in coupled with the burning desire to survive have resulted in people doing some unimaginable things to stay alive.

Some sources suggest that now almost 60% of the worlds poor now call India home. It is also the country with the highest rate of Malnutrition among children under the age of 36 months: a massive 46%. 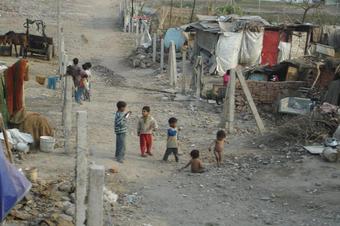 Children are taken out of school at a very young age (and that’s if they ever went to school) and forced to work to support their families. You will see the tiniest of children picking through huge rubbish piles extracting plastic bottles, dragging out rags, flies buzzing, horrendous working conditions for any mortal. One scene that made me physically sick when I was in India was a group of 40 young boys, black from head to toe, picking through coal on a line of freight trains, I don’t know what for …but I’m sure they couldn't have been getting more than 30 rupees (about 40 pence) a day. And this is just the tip of the iceberg, there are so many children forced into labor in India who will live and die in similar scenarios. Girls barely in their teens are forced into prostitution, some are sewing from day break to night fall, others beg having had eyes blinded or limbs removed to add to their pathos .. and it is not just the children .. their parents, and their parents, are also begging, anything for the odd coin. The poverty India can be shocking to say the least and it’s a harsh reminder how unfair life is.

A number of factors are responsible for poverty in the rural areas of India. Rural populations primarily depend on agriculture as their livelihoods, which in turn, is highly dependant on rain patterns and monsoons. Inadequate rain and improper irrigation facilities can obviously cause low, or in some cases, zero production of crops followed by the obvious but sometimes catastrophic repercussions that often follows.

An Indian family unit can be often very large, which can exacerbate the effects of poverty. Also, the caste system which is still found a lot in India (although it is getting less) is a major reason for rural poverty for it keeps people locked in the endless cycle with less facilities and opportunities for the lower castes. The government has planned and implemented poverty eradication programs, but the benefits of all these programs have yet to reach the core of the country.

The phenomenal increase in the city populations is one of the main reasons for the urban poverty in India. The massive and relatively recent increase is a result of major migration of rural families to cities. This migration is mainly caused by poor employment opportunities in villages and is exacerbated by the fact that there are few job opportunities in the cities as well. 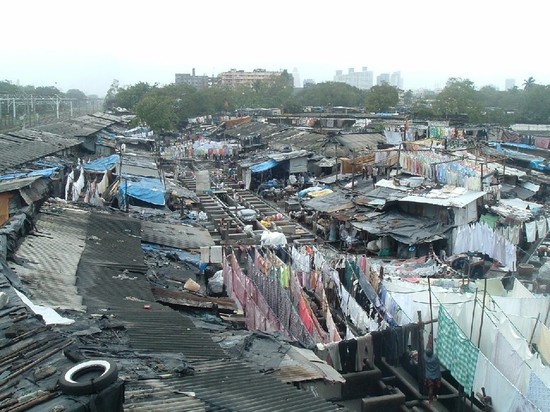 The poverty in India has its roots entrenched in the culture and the problems spread just as deep. The mass over crowding and extreme deprivation have resulted in huge man made slums, the largest of which is in Mumbai. Miles and miles of rubbish, mangled iron, human excrement and open sewers form what millions of people call home. The water is rank, there is no waste disposal, no jobs, no healthcare and little support. There is little opportunity for education so there is no end to the poverty cycle. The slums are affected by frequent outbreaks of cholera, typhoid and malaria and are often ravaged by water shortages and wild fires.

Travel and Poverty in India

The loo attendant holds out a tray showing the pound coins left by passengers from the previous plane, so, heh – we all follow suit and add more pound coins to her pile. Each pound coin is worth so much and even a skilled craftsman finds it hard to earn that for a long day’s labour…. Yes, I put my pound in and I am happy for her too.

Out of the airport terminal you will be besieged by enthusiastic beturbaned men desperate to carry your luggage to wherever you want to go, desperate to sell you their wares, desperate to show you the way, desperate to clean your shoes, desperate …. people missing limbs, women embracing babies signing that they are hungry, starving, dogs are everywhere scavenging for the last crumb but enduring kicks and curses and sometimes beatings to swallow anything palatable. Welcome to the phenomenon known as.. India!

You may be continuing your journey via train where the adventure continues. The stations are so full of people, some are cooking, sleeping, begging, laughing, crying, living out whatever life has thrown at them – look at the train tracks, the rats the size of cats who have a totally awesome life thriving on deitrus, rubbish and shit … look to the right, weary donkeys following the lines laden with boxes for McDonalds carefully making their way over the tracks.

The table below represents deaths by causes in India. A reduction in poverty in India would have a dramatic affect on these figures 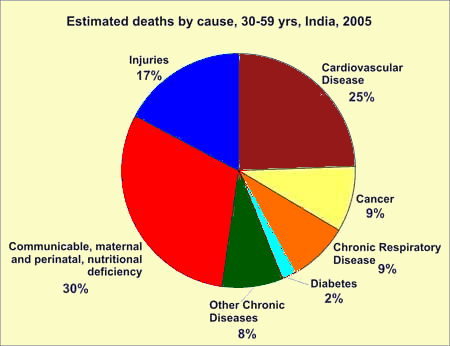 This map represents the poverty headcount per state in India in 2001. While the map may be a little old now the figures havn't really improved. 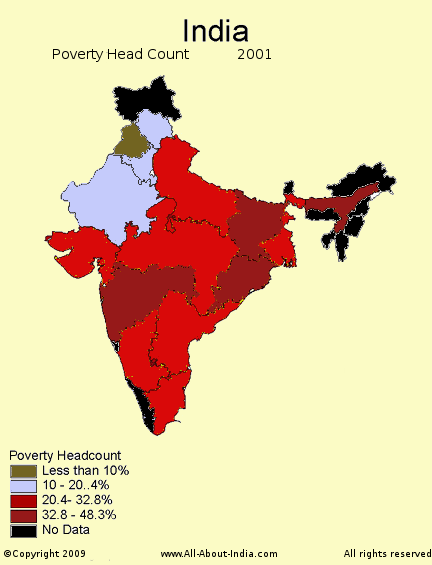 India has a hugely diverse population and makes a fascinating race to study.

Complete information about this amazing river, the people who depend on it and it's future.

From this poverty in India page

Return to the main Geography of India page