Malaria in India poses a serious risk but protection can be cheap and convenient. When I was out there I stopped taking my anti-malaria tablets after about a month and was fine but it is up to you whether you want to risk it or not. Your odds of catching malaria in India are about one thousand to one. Anti malaria medication is not a free prescription on the NHS but is available from most pharmacies.

However, some of these drugs are proving controversial, in some cases the drugs have only masked the symptoms of malaria making the situation worse. Some people have reported depression and other mental problems and for some the drugs have proved downright dangerous.


Most doctors and health experts suggest that taking precautions against Malaria are imperative in all areas below 2300m, all year around. The risk of catching Malaria in Himachal Pradesh is small and the risk is eliminated in areas like Jammu, Kashmir and Sikkim, which are at high altitude. See the section on this website for practical advice on avoiding being bitten by mosquitoes. See the mosquito section on this website for practical advice to avoid being bitten. 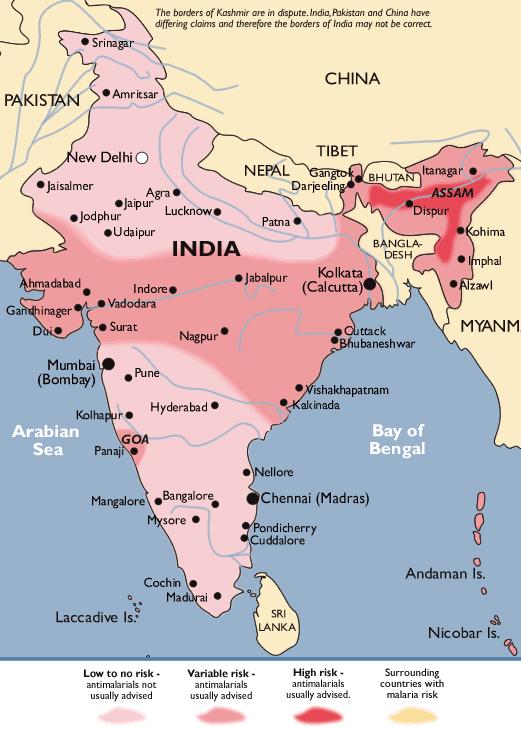 Above: A map of Malaria in India

Most people hate taking drugs to avoid contracting Malaria in India but sadly these preventative treatments are sometimes unavoidable. If you start taking any of these drugs and experiance any negative side affects, don't hesitate to change immediately. Or, if you have really had enough and it's ruining your trip, just stop taking them!

Chloroquine is one of the most popular and cheapest anti malaria treatments but there have been reports of resistance in some parts of India so to combat this it is used in combination with Proguanil (pauldrine) but even this is starting to prove unaffective and is no longer recommended.The dosage is two tablets a week, taken at the same time, starting one week before departure and continuing for four weeks on arriving home. The only downside are the side effects, I never experienced any but they can range from blurred vision, vomiting, nausea, itching, rashes and in the worst case, hair loss. It is worth speaking to your doctor if you are taking other medication especially drugs containing Cimethidine as it can increase blood chloroquine levels and pose a serious health risk.

Malarone is probably one of the best anti malaria treatments available but it comes at a price. It costs around 40.. for two weeks so if you are going away for a long time it really adds up. But if you want safety and convenience then this is your option. (It tastes better than Chloroquine as well). Take one pill a day, everyday with food starting 2 days before arrival abroad and for one week on arrival home again. The side effects are mild from light headaches, vomiting to dizziness.

Mefloquine is given once weekly in a dosage of 250 mg starting one-to-two weeks before arrival and continuing through the trip and for four weeks after departure. The side effects may cause mild neuropsychiatric symptoms, including nausea, vomiting, dizziness, insomnia, and nightmares. Rarely, severe reactions occur, including depression, anxiety, psychosis, hallucinations, and seizures. Mefloquine should not be given to anyone with a history of seizures, psychiatric illness, cardiac conduction disorders, or allergy to quinine or quinidine, which are related medications. Mefloquine should be avoided in scuba divers, because of the potential for lowering the seizure threshold, which might complicate decompression illness.

Doxycycline is also effective in areas resistant to Chloroquine but may cause an exaggerated sunburn reaction, which limits its usefulness in the tropics and on the beach! Doxycycline may cause inflammation of the esophagus when taken on an empty stomach especially at bedtime, so it should always be taken with food and never before lying down. In women, Doxycycline is a frequent cause of vaginal yeast infections. The usual dosage of Doxycycline is 100 mg daily starting one or two days before arrival in the malarious area and continuing throughout the trip and for four weeks on arrival home. For children greater than 12 years of age, the dosage is 2 mg/kg daily up to the adult dosage of 100 mg. Doxycycline should not be given to children less than 12 years old, pregnant or lactating women, or anyone with a history of a tetracycline allergy. It should also be avoided in anyone taking Hepatotoxic medications and anyone with a history of liver disease, Lupus, or Myasthenia Gravis.

This fantastic book covers all of the basics of healthy travel to the east with special attention given to India and things such as:

Introduction to Malaria Problem in India

A fascinating book covering a hole heap of interesting information about Malaria in India tracing it's destructive history, shaky present and looming future, The book also gives information on preventative measures and what you can do as an individual to stem the tide of Malaria in India and indeed the world.

Mumbai is becoming a hotspot for malaria in India with an increase of 20% this year alone (2010). Follow this link for more information.