This page covers a wealth of knowledge about Indian art paintings from the ancient past to present.. India has always been known for its varied cultural wealth and has an incredibly strong historical tradition pertaining to it's paintings.

The paintings make up one of the most diverse collections of paintings of any nation on earth all of which tremendously influenced by local cultures, climates, social practises and religions

One of the unique things about Indian paintings is that they are usually representative or at least connected to highly significant religious or cultural events. Other than these two main themes it is possible to find pure and eternal love in the paintings of one of the oldest civilizations on earth.

The beginnings of Art in India

The story Indian art painting dates back to over 4 thousand years ago to a period when artists used rocks and stones as their canvases. As time went by, the artists turned towards architecture as a platform for their art and soon magnificent statues and monuments where created. Take the great works of Ajanta and Ellora caves for example, vast areas of rock carved deep into the hill side representing huge temples of enormous religious significance at that time. 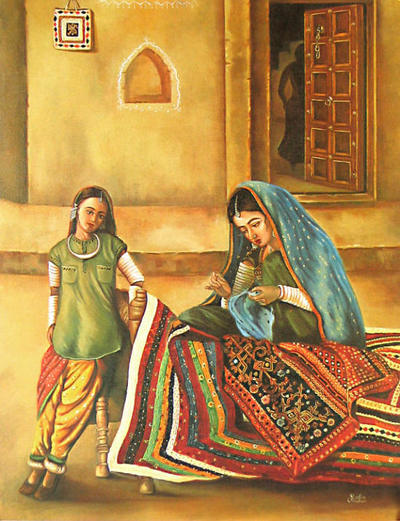 Around the same time, paper and cloth was beginning to be used as a base for the paintings. It was in this period that this new Indian art form really began it's journey and established a strong foothold in Indian society and the psyche of the Indian people. After the initial emergence of these new types of paintings there was an explosion of new styles of arts all around India and in a way this trend never really stopped.

Thousands of years of influence from dramatical diverse cultures, religious practices, landscapes, and ethnicities created one of the most varied collection of different painting styles in the world.

Two of the most popular and traditional of these art styles are known simply as Murals and Miniatures. The murals are comprised of large wall paintings on the sides of caves, halls, palaces or temples while the art of miniature painting, which is still a widely practiced and taught art form throughout India are made up of small illustrations on leaves, sheets of ebony, linen or paper. Typical content of both of these art forms usually consisted of scenes of religious or cultural significance.

Generations later, eastern paintings were the latest fashion in India and usually consisted of images of the Buddha and his works. The complete works of Gautama Buddha were illustrated and preserved for future generations.

Around the same period as this, western Indian art paintings concentrated on life and works of lord Krishna. Illustrations such as Gitagovindam and various hymns were inscribed on an entire series of miniature paintings.

The paintings served as manuals of religious ceremonies and philosophies and thus had a huge role to play for the future generations of Hindus. 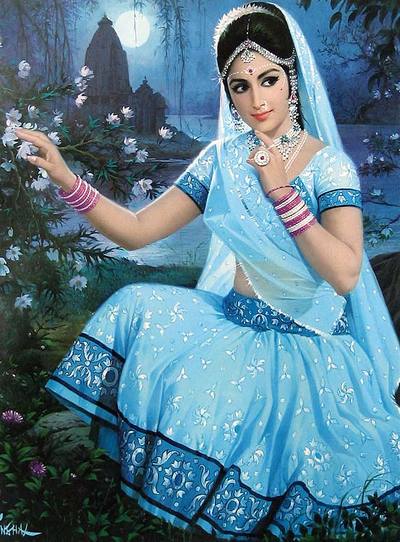 In time, the kings saw the growing demand and the tremendous interest people had in these fine arts. They established several schools and colleges were established and began some of the first art schools in the world. They set out to teach many art forms to a willing audience meaning that the evolution of Indian would simply never end.

One of the the interesting things about Indian paintings is the fact that each emperor who ruled the country had a different choice of art. What this meant was that they each promoted a new style resulting in essentially a new style for each generation of India's people. Surprisingly this is one of the main reasons why Indian art is one of the most diverse and mixed in the world. 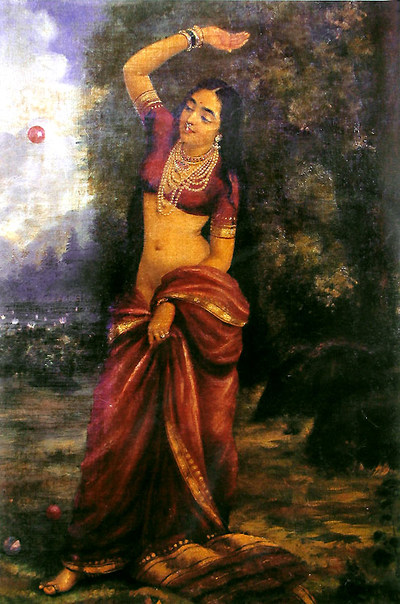 The period of oil paintings in India was another fascinating chapter in the country's history. These were primarily paintings painted onto canvas or cloth with coloured oils.This technique which was popularized by a very successful and well known artist, Raja Ravi Varma who lived in teh 18th century. He focused his work around the great epics such as Ramayana and Mahabharata and also many of the episodes relating to krishna. The oil paintings always gave the painting a ‘live’ impression and the glossy finish made the painting look real.Raja Ravi Varma is the proud winner of 1st Prize at the Vienna Art Exhibition in 1873 and since then oil paintings in India have taken on a world of their own with great artists like MF Hussain continuing the art.There hundreds of variations of paintings styles and art forms, most of which are still practised to this day. Some of the most popular include:

This style of art was popularized by the then rulers of India, the Mughals. These were in the time frame of 16th – 19th centuries. The Mughal style of Indian art paintings was primarily focused on Persian and Islamic styles and content. They mastered the work on wildlife, wars, hunting and prevalent social issues.

Coming primarily from Rajasthan, this paintings were originally done on cloth with content ranging from religious, marital, royal and various historical scenes along with various figures of great importance such as philosophers and physicians.

Originating from Rajastan and Himachal Pradesh respectively, these art froms mainly focused on the lives of lord Krishna and the epics of Mahabharata and Ramayana. Along with these, the Rajput manuscripts had several landscapes portrayed. 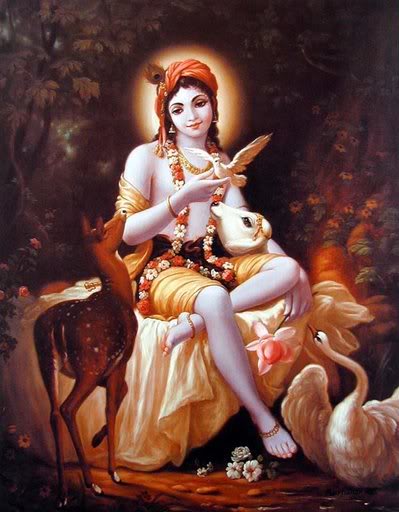 from this Indian art Paintings page

or Go back to the main Indian Art page