Women in India have to take a lot of extra precautions when travelling for a number of different reasons. Firstly, it is still a very conservative country and many beliefs and traditions heavily contradict western lifestyles. Women travelers get a bit of a raw deal because of the two contrasting cultures and our western habits can be perceived as inappropriate and degrading.


There are a lot more less women than men in India and because of the repressed nature of women, most men will have to wait until they are married, until they have any contact with Indian women. Western influences have changed this a lot in the cities where old belief systems are being freed up. The hospitality of Indians in general is second to none but western women have the reputation of having 'loose morals' and for this reason they can be heavily preyed upon by Indian men. 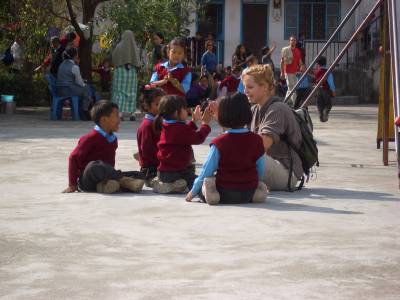 A bit of common sense and good advice can stop travelling women in India getting into sticky situations..

● Don't wear revealing clothes anywhere in India except on one or two of the beaches in Goa. This might seem a little unfair but you will attract so much unwanted attention and advances.

● Apart from the big cities, all forms of touching, kissing and petting between opposite sexes are heavily frowned upon and in some parts are illegal. Homosexuality is also illegal in India and is punishable by up to 10 years in prison.

● Women in India are recommended that they don't even attempt to shake hands with someone of the opposite sex unless they gesture first. The best way to greet someone is by putting your hands together in front of your chest, or simply saying 'Namaste'.

● Smoking by women in India is not acceptable apart from in the cities. Again it can attract unwanted, male attention as you are seen to have loose morals. The same goes for drinking.

● Modern discos, dance clubs, pubs, 5-star hotels are the best place to relax and have a drink but it is probably best to have a companion, ideally male.

● Even on beaches, the Indians are fully clothed but as more tourists are discovering Goa, the rules are relaxing more and more. On the beaches, most western women in India feel comfortable enough to walk around in a bikini and some even topless . It is best to find out what sort of beach you are staying at before you take your clothes off. See the beach guide section of this Website for more details.

● Most intercity and local trains in India have women only carriages and it's highly recommended you use them as the trains get very crowded and carry a lot of wandering hands!

● Women in India are advised not to venture outside in a street party or wedding alone unless you are invited. Street parties generally don’t consist of women. Instead, very drunk men are seen partying at such occasions and women close by can be subjected to groping and sexually aggressive behaviour. It's really not safe for women to attend these festivities alone.

●Avoid talking in a friendly manner with men you meet in buses, trains, restaurants, shopping places, etc. It may be viewed as a flirtation and lead to unwanted and unexpected sexual advances.

● Lots of women travellers I have spoken to find wearing traditional Indian clothes, such as salwaar kameez or sari always gets you more respect from Indians and is another great way of making friends with Indian women.

● Do not venture in isolated places alone. It is also advised not to go outside alone after it is very dark.

A new course has opened up helping women to get the most out of travelling in far flung places and it's been recommended to me a few times by readers. Take a look, it's called Travel with courage and confidence: an online course.

Many women who ask me about going to India usually mention the very famous book 'Wanderlust and Lipstick', a book aimed at women travelers to India. Their question inspired me to review it and I have to say that Beth (the author) has really hit the nail on the head with regards to the psychology need for a woman traveler in India.

I gave it to Kate and she agreed that it really does cover the key aspects pertaining to women travelling in India alone. Also definitely worth a look!

It's very hard to get the balance right in India for both men but especially women travellers. Of course, you want to make new friends with people and be open to new opportunities but at the same time, you can't trust everybody. India is a place where your judgement and gut feelings come into their own and you'll start to trust and rely on them more and more as your trip goes on. You also start to notice that your inner-judgement or 'gut feeling' is nearly always right.

Below: Kate dying her blonde hair brown to minimize attention for the locals 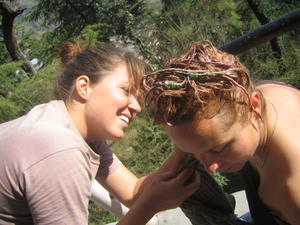 This is the best bit of advice I can offer anyone visiting this amazing country. If it feels good, do it, you are there to have fun and to experience life. It's no good scaring yourself once and locking yourself away for the rest of the trip. I met so many people doing this in India and it's such a shame, they had one bad experience and that was it. They convinced themselves that everybody was bad which is the worst thing you can ever assume on this planet. It's an easy mindset to get into though, especially when you are seen as a potential target everywhere you go and it seems the whole country is in your face all the time. If you don't talk to people you won't learn of new opportunities and experiences. Relax, your gut feeling will let you know who are the baddies, learn to trust it and use it, it's your biggest asset when you're six thousand miles away from home!

From travel for Women in India

Go back to the India Travel Guide