The history of Indian body art is a mixture of both fashion and tradition for almost 5000 years. Indians, who were always known for their respect of culture and tradition, use various Indian body art techniques during several festive occasions like weddings, receptions and so on.

I hope to show a sneak peak into the history of body art in India as well as its role in modern society.

The primary focus of body art in India has always been on the women of the house. The traditional art of the Indian body is known as “Mehandi”. Mehandi is a blend of leaves of a plant by the name of “Henna” [scientifically known as “Lawsonia inermis”]. The leaves are powdered finely and are mixed in hot water as and when required. This paste is then applied on the particular area where the body art is desired. 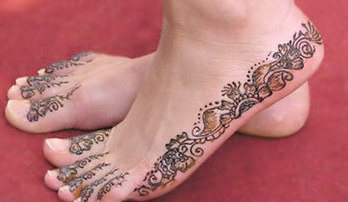 Apart from India, Henna has been used in ritual, ceremony and celebration for many centuries in Morocco, throughout the Middle East and parts of North Africa. The various benefits of Henna have resulted in an increase in its usage, particularly in the last two centuries.

The application of Mehandi is quite simple. Once the Mehandi powder is mixed in hot water, you can apply it either using a brush [if the area of art is larger] or commonly is applied using a “Cone”, similar to the one used for Icing in Cakes. This usage of cones is particularly popular while applying Mehandi on hands / face. By using a cone, you can create a design of your choice with precision. This needs to be left on for approximately 1 – 2 hrs and is to be washed off. It leaves the applied area with a shade of dark orange or light red [depending on the leaf used and the duration of application]. 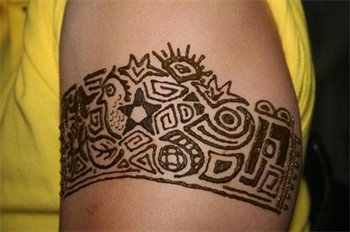 Yet another advantage of the Indian body art technique “Mehandi” is that it only lasts for approximately 2- 3 weeks, after a month it is gone. These temporary types of 'Indian tattoos are particularly popular in marriage ceremonies. In a traditional Indian wedding, one would notice that all the women involved present themselves with their hands painted with Mehandi. A lot of people in India have taken this up as a profession. This is also a popular counter at fairs / exhibitions. 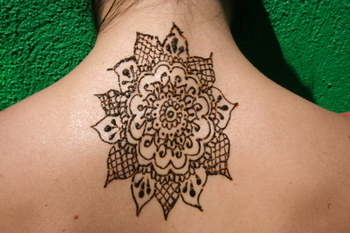 There are a lot of Indians who apply Mehandi / Henna to their hair, leaving their hair in a typical shade of light red. It’s also believed that Mehandi acts as natural conditioner for hair.

Apart from Mehandi, Indians, especially the ones in rural section use tattoos and piercings as a part of their superstitious beliefs. A lot of people, especially from the poorer communities, believe that having a particular shape of Indian tattoo drawn would get rid of bad omens and would bring in luck. A lot of them get their either their loved ones names or the name of god on their body to show the affection or devotion they possess for them. 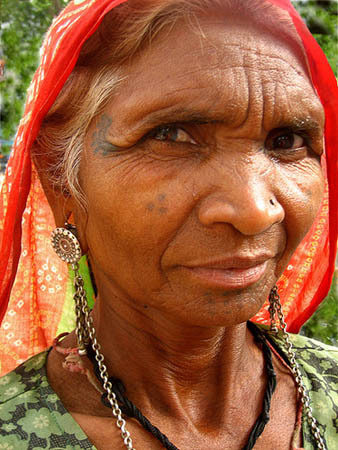 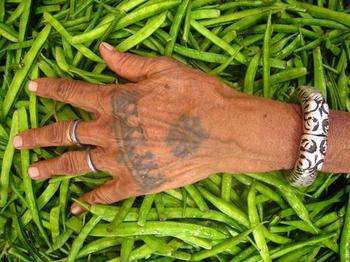 Apart from these, other forms of body art are popularly explored by people from all walks of life in the form of Body Piercings. This is again is a tradition that has been going on for centuries and shows no sign of dieing out. Although this is uni-sexual, the ladies yet again make up the majority of the pierced population. It is actually a religious ceremony in the Indian families that the ears of the girls are pierced and an ear-ring is decorated through the piercing. Along with that, the nose of the Indian woman is pierced and a nose-ring is used. This is a decorative act.

The present and the future

In the recent past, the effects of globalization have clear impact on Indian body art. Indian body art has gone through several changes and the usage of piercings in several parts of body is gaining immense popularity. Accordingly, tattoo is also being used as a style statement by the youth of the country. Infact India plays a host for many foreign tattoo professionals who are into careers in this field.

Overall, Indian body art has seen a great transformation starting its existence way back in the age of kings to this age, from temporary tattoos to permanent ones, from piercing for beauty and tradition to piercing for fashion. Indian body art from a tradition has transformed into a great business. With the growing demand in this field, many recognized universities / Colleges would start offering courses to meet the requirement.