Of Chat and Trains 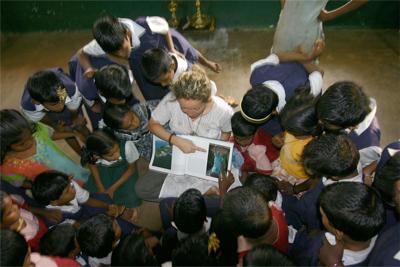 Me Volunteering in India

It was hard to imagine that I had been in India nearly six months. Experiences passed through my mind, as the trains passed by me while I waited at the Gorakhpur train station. My train was already half an hour late, but I expected that. Having stayed a day in a local hotel, I heard stories from others travelling through. Every one of them mentioned that their train was late; some, that their ticket booking was not there and they had to rebook. I was prepared for the worst, but everything seemed okay that night.

My mind retraced the last six months, remaining on certain experiences a little longer before moving on to the next. I had come to volunteer my time for social work and join a project for the mentally challenged in Mumbai. Although not even 17 years old, I knew that I wanted to dedicate my life to helping others and making a difference in the world.

I was in India less than a week the first time it really hit me: the question. What am I doing here? I had spent the evening dressed up as a clown, cheering underprivileged children and enjoying a local carnival along with them. My hosts insisted I try the local chat; although it was delicious, my stomach had not yet acclimatized to certain ingredients therein. The next 48 hours were spent either in the bathroom, or very close to it. Yet I also remembered the first time I saw the monsoon rains washing away the dirt, and making the sky bluer than it had ever been. I remember walking on the flat roof of my new home and breathing the peaceful night air. I remember driving down, feeling culture shock, yet still somehow loving the country, the people, and everything about India. “This is it.” Solly said, breaking me out of my deep thoughts. Our train had finally arrived.

I was headed over the border of India into Nepal, planning to then stay on another six months in India after a brief trip to Kathmandu. He headed to the train with the luggage and I tried to keep up. Solly was a fellow volunteer, from Chennai. I was happy I had someone to travel with who knew the ropes and could take care of any difficulties. Everyone started pushing their way onto the train and I was suddenly separated from my travel partner.

There seemed to be a people-lock and I could not get through. I called to Solly and he turned back, pushed a couple people out of the way and pulled me onto the train. Once we settled down, I checked to make sure all our luggage was on board. That was when I realized, my wallet was missing.

That little blockade was for a specific reason, so someone could swiftly grab my wallet. I had not felt a thing. I told Solly what had happened, and we both smiled. I might be a tall, blonde foreigner, but Solly was carrying all the money. The equivalent of only £5.00 was in my wallet.

I knew I would be more careful next time; after all, I planned to be in India another six months, and somehow knew I would love it. Regardless of upset tummies, culture shock, or trains running late, India is an experience no one should miss.