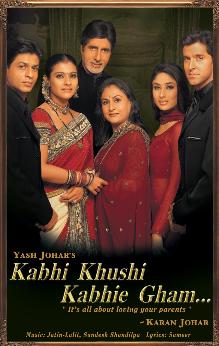 "It's all about loving your parents"

Businessman Yash Raichand and his wife Nandini have raised their sons with love and affection, but Yash disowns his adopted son Rahul after he marries a young woman of a lower social. A decade later, younger brother Rohan heads overseas to search for Rahul with the hope of reuniting his broken family.

This 2001 romantic Bollywood drama has received fifteen nominations at the Filmfare Awards and has won five awards. It is a riot of joyful color, music, choreography and is the perfect movie for Bollywood fans.

Join in and write your own page! It's easy to do. How? Simply click here to return to Bollywood-Top Film.